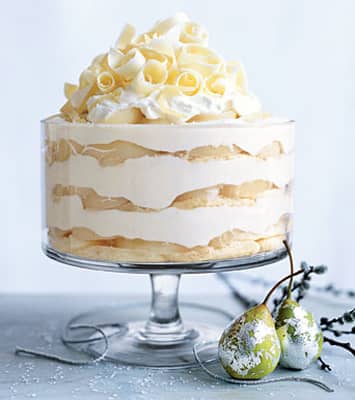 I was a Contributing Editor to Bon Appetit and wrote for the magazine since from 1999 to 2014. My articles appeared in the magazine and you can also find them archived at both BonAppetit.com and Epicurious.com.

Above is my Tiramisu Trifle with Spiced Pears and White Chocolate, which graced the the cover in December 2007.

I also represented the magazine on national television programs dozens of times on shows such as TODAY, Dr. Oz and on HSN (HomeShoppingNetwork). I had a monthly segment on the CBS Early Show and was a frequent contributor to The View.

Here are some of my favorite recipes that I have developed for Bon Appetit over the years. Be sure to check the links to the original recipes at Bon Appetit and Epicurious where you can read reviews and print out shopping lists. 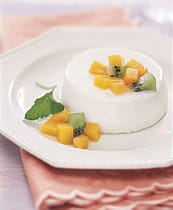 Buttermilk Panna Cotta with Tropical Fruit – This panna cotta has a very slight tang from the buttermilk, and while it is lovely plain, or with your choice of toppings, don’t miss out on this mélange of tropical fruit.
–
Image posted courtesy of photographer Jacqueline Hopkins

White Chocolate Tiramisu Trifle with Spiced Pears – a spectacular showstopper for your white Christmas holiday table, or anytime you want the flavors of white chocolate, spices, pears and cream. As an added bonus, it has many do-ahead steps.

Cheesecake Tart with Tropical Fruits – a thin layer of creamy cheesecake nestled in a sweet, crisp tart shell. Top it any way you like, but this colorful assortment of fruit makes a stunning presentation. I love the idea of cheesecake but often I am done after one bite. This thinner profile is a great way to indulge.
–
Image posted courtesy of photographer Leo Gong

Mint-Truffle Ice Cream Terrine with Mint and Chocolate Sauces – the polka dots are chocolate truffles! The ganache makes the truffles as well as the sauce, making this easier than it looks – and you start with purchased vanilla ice cream. Guests will want to know how you got the dots in there!

Rhubarb Lattice Pie with Cardamom and Orange – a perfect pie for spring when rhubarb s fresh. The cardamom and orange are an unexpected twist – you’ve never tasted a pie like this before. A scoop of vanilla ice cream is a welcomed addition.

Coconut Peach Cake – This white cake has coconut milk in the batter, coconut shavings all over the outside and a luscious peach filling between every one of its four layers. A great choice for an August party.
–
Image posted courtesy of photographer Mark Thomas
You can also see Bon Appetit recipes that I have reviewed and made at the following links:
– Chocolate Oatmeal Moon Pies
– Banana Cream Pie with Salty Bourbon Caramel
– Raspberry Linzer Bars